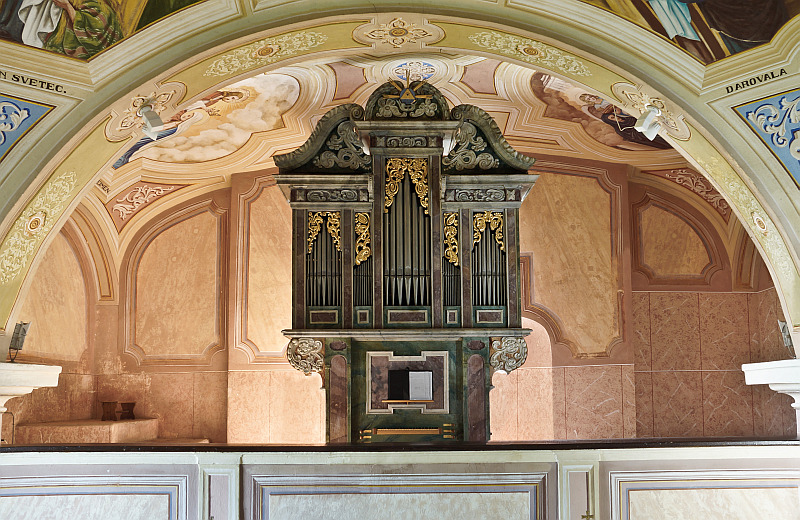 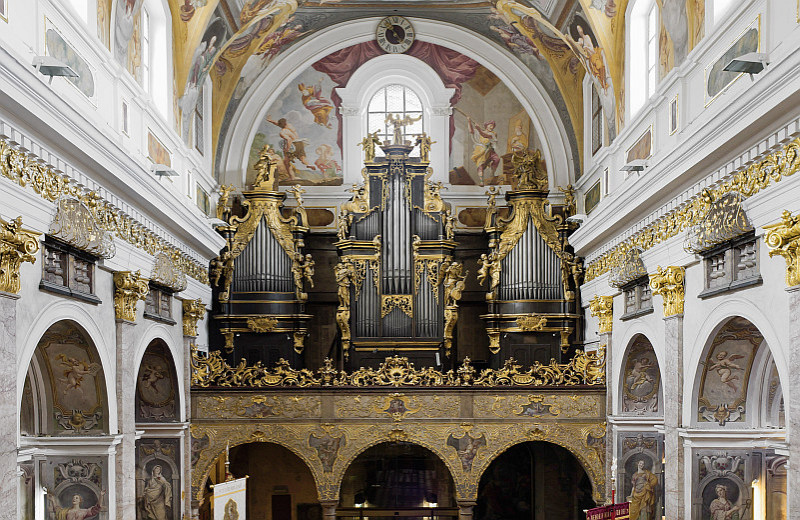 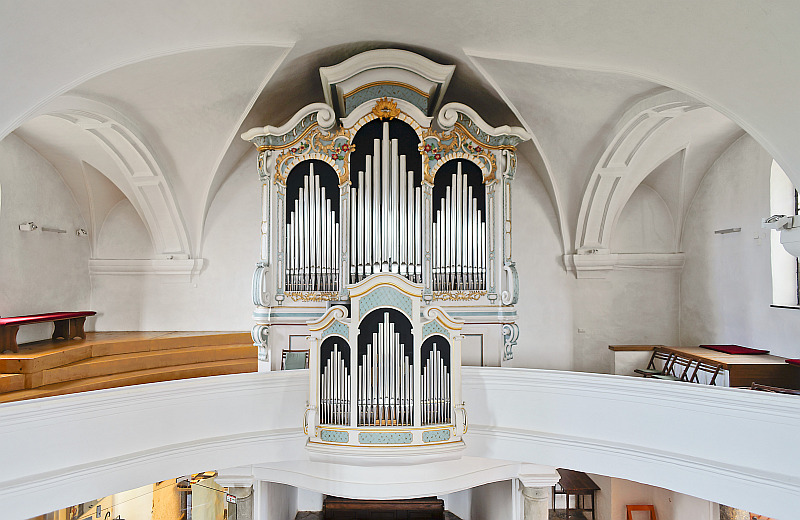 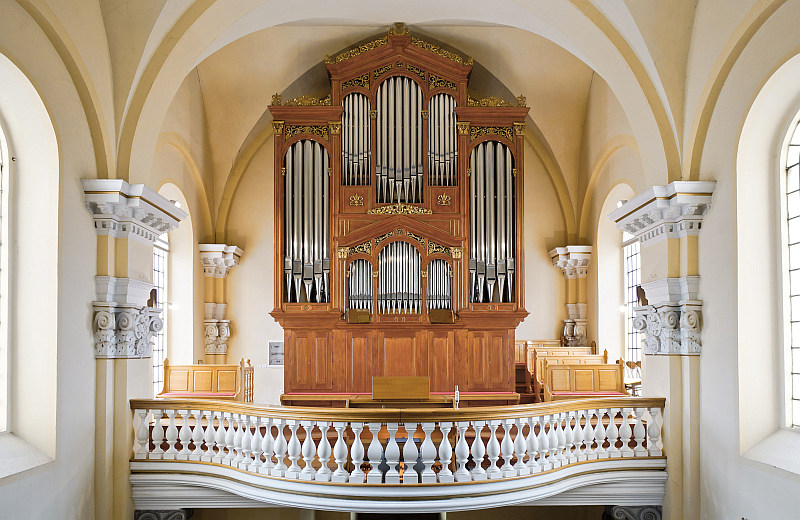 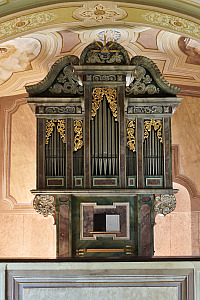 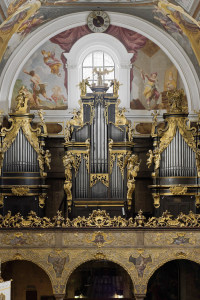 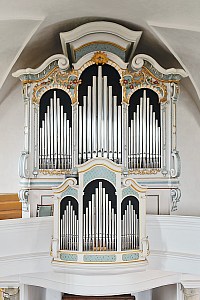 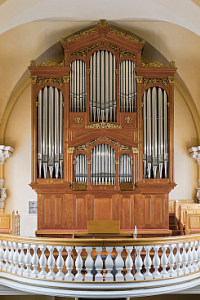 Your bookshelves certainly host a number book on organ builders organs and their and landscapes. However, what we're offering in Orgle Slovenije - Pipe organs of Slovenia is in a way different. We would like to emphasise five points rarely seen in the today books.

First, the book Orgle Slovenije describes the instruments of the entire country. Indeed, we are presenting all organs in the Republic of Slovenia, their precise location, builder(s), milestones and usage, accompanied by a short description and up-to-date photograph.

Second, you will notice that - with the except of description - all listed data should suit our international audience. Besides, a significant part of the book, like Introduction, History and Synthesis with comprehensive graphical presentations are printed in English as well, and would be translated soon into some other languages available on our web page orgle.si. Third, photos are taken "en face" giving the observer an outstanding view rarely experienced. By showing the prospect perpendicularly, and in the colours of the ambient without using artificial light, they serve well for study and research purposes.

Fourth. we separated a locations' map, personal index and legends to the supplement booklet. The idea behind this approach is to make inquiries and research easier - you should know that a book of 700 pages weight nearly 3 kilos.

Fifth, the text is supplied with many QR codes. We believe that digital devices are becoming a permanent accompaniment to our study, art and daily life. By doing so, we are networking the traditional paper-like product with the future of digital and multimedia age without abandoning the classics.

There are two kinds of codes, through those you will be able to reach additional contents and use the advanced possibility of the existing data and facts. Each of the smaller QRs - printed by every organ - leads to the web page with additional contents to the separate instrument. For now, an interactive web-based map shows precise place. In the near future, we will link lists of sources to existing digital libraries, add the sounds of the separate stops, or music and video. The larger QRs direct us to upgraded indexes, like an interactive map of all places, searchable table of sources and personal index. By search and filtering ability, all listed internet solutions serve as advanced tools increasing effectiveness.

Finally, both authors, a prominent university professor emeritus Edo Škulj, and database expert and photographer Jurij Dobravec are sharing the result of decennials work to the Slovenian and international public as a contribution to the Year of European cultural heritage. We believe that the contents and the organization of the book with the immense potential of the Internet connect our organ past with a sound organ future. 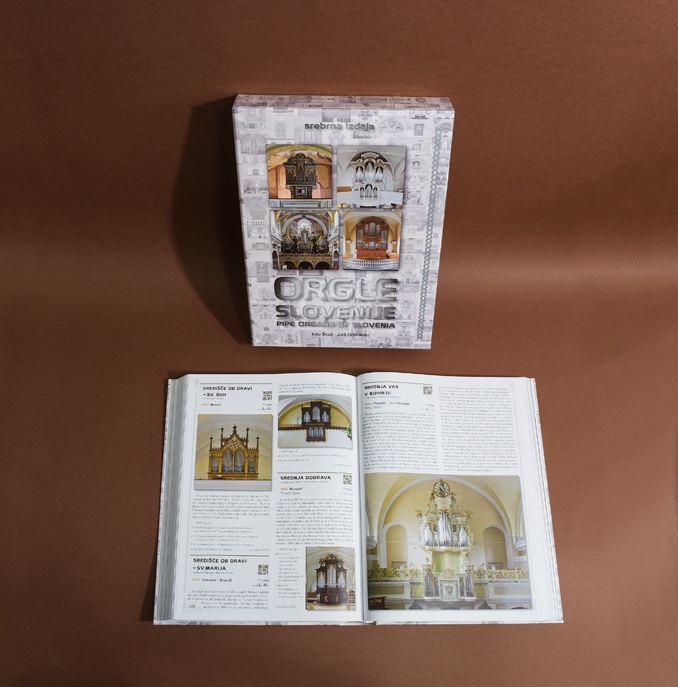 Cultural crossroad in the Ancient and Middle ages

Contrary to legend, history tell us that the area of the Northern Adriatic and Pannonia was once an important trade route from the eastern to the western part of the Roman Empire. Clearly, merchants combined the transport of goods with the exchange of knowledge. The ancient towns of Emona (Ljubljana), Petovia (Ptuj), Capo d’Istria (now Koper), and others were on the route from Constantinople, now Istanbul, via Aquincum (Budapest) and Venice and further to Rome. Through this route, the art and craft of organ building came (back) to the Christian West.

Later on, in the year 826, an organ builder Georgius from Venice travelled with two knights to the German royal town of Aachen. The findings of leading organologists show that he built an organ there which might be similar to the one depicted in the Utrecht Psalterium. Sources are not clear as to whether the organ builder lived in the city of Venice or came from elsewhere in the Republic . However, one of the knights, Balderic, was the Duke of Friuli (dux Foroiuliensis). The other, Gerold, was the Count of Pannonia. The area of what is today Slovenia was then partitioned with half going to Friuli and half to Pannonia. Supposedly, the same Georgius setup an “eccellentissimo” and “meraviglioso” instrument in the Patriarchal Church in Grado, destroyed in 1022. Descriptions of the organ suggest it was not only excellent from its sound but possessed a marvelous prospect.

Disregarding fresco paintings of the 14th and 15th centuries, the oldest known mention of organ activities in the area of Slovenia is indirectly identified at Koper (then Justinopolis). In 1381 Un Magister de Justinopoli e chiamato a Udine ‘super organis aptandis’, Master from Koper was called to Udine to repair the organ. Some decades later in Maribor, three craftsmen appeared in the town’s list: in 1452 Niclas, argelmeister, in 1463, Plauelder, czingiesser (tinsmith), and in 1467, Phillip, goldsmid.13 Niclas’ trade is directly connected with making instruments, which might then have existed in the town Church of Maribor. The other two were perhaps needed for work associated with organ building such as metal pipe production and decoration. During the 15th century, all the prominent churches in the area had organs installed, for example, the Cathedral of Piran in the first half of the century, Cathedral of Koper in 1421, Ljubljana Cathedral between 1463 in 1488, and Kranj town Church before 1486. 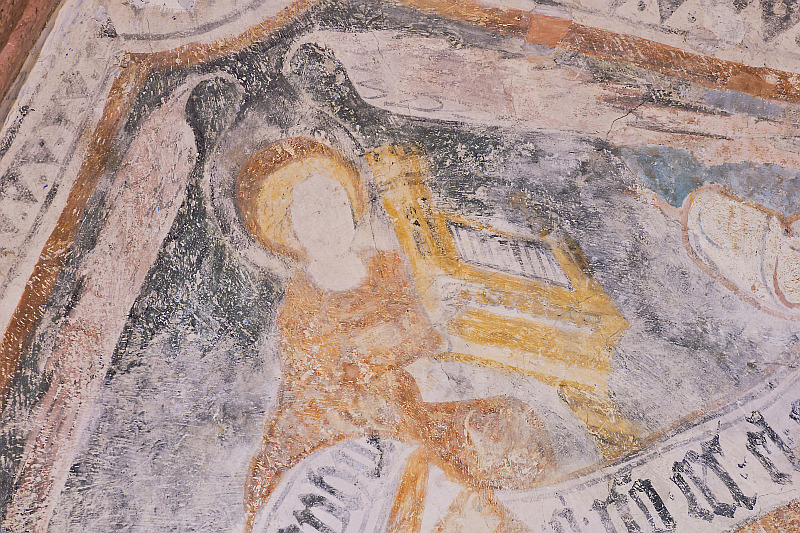 We have to mention two significant musicians of that time: Jurij Slatkonja and Bartolomeo Budrio. The first, in German spelling ‘Georg von Slatkonia’, was born in Ljubljana, and served in Vienna at the court of the Roman Emperor Maximilian I. At the beginning, Slatkonja worked as a director of the choir later known as the Vienna Boys’ Choir, and then as a chapel master of the Vienna Court Chapel. In 1513, the emperor named him as the first bishop of Vienna city. On the famous woodcut prints Triumphal Procession, Slatkonja is portrayed as a head of musicians. The second person who should be mentioned here is Bartholomeo Budrio (Pelusius Bartholomeaus Iustinopolitanus), a printer and musician from Koper. He was a mentor and teacher of Ottaviano dei Petrucci, who invented figural music printing by movable type. Petrucci relates that he developed the idea of perfecting his invention of printing polyphony with the advice of Budrio. On the basis of their inventions at the end of the 15th century, printing of scores – including organ parts – was simplified.
FURTHER READING